I wrote this post a while back. It has been published now in a journal (see bottom of the page) so I’m republishing it again today:

I had thought of simply calling this post “I’m tired of it!” It is true though. I am. I’m tired of seeing through the lies and tired of it not making much difference. I’m tired of our bent as a species towards bloodshed and violence.

Last I checked the Bible still says there is no one truly good, but God. There is also that of God in all of us and that of the author of confusion. I’m tired of people who know this not living as if they do.

There are factions and groups of all sorts, not just terrorists and heroes. I’m tired of prejudices that label entire nations without regard as heroic or terrorist, ally or enemy. (Side note: There is a group of people in Afghanistan who deeply oppose both the Taliban and Nato. They also oppose violence itself ).

I’m tired of no one talking about the inevitable 20 year war following Wayne and Bonds acts of shock and awe revenge. I’m tired of people not seeing that revenge is not justice. Indiscriminate killing is not holy or righteous.

I’m tired of the cost of war. I’m tired of thousands of combatant and civilian lives being lost on all sides. More will still follow, for every war leads to more war.

I’m tired of the lack of compassion and empathy so many have. We mourn for “ours”, but not for “them”. Our tears should be spilled rather than more blood for all the orphans and widows. For children born at the wrong place and time.

Yes I’m tired! I’m tired of the media, Wayne, Bond, the Taliban, Nato, corrupt foreign policy, racism (war is also racism) and the entire rotten broken cisterns of this world. I’m tired of every act of violence no matter how small that contribute to this dark night, even any thoughts that fail to be pure and captive to the obedience of the Prince of Peace. I’m tired of our indifference and unrepentance as individuals and collectively as a species. I’m tired of hearing the screams in my heart as I try and sleep at night troubled by this world. I’m tired of it, so tired I could cry. The question is are you?

(A version of this article recently appeared on page 2 of the Primitive Quaker journal, The Call) 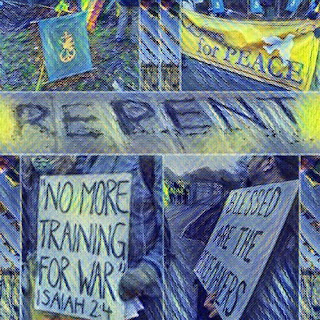